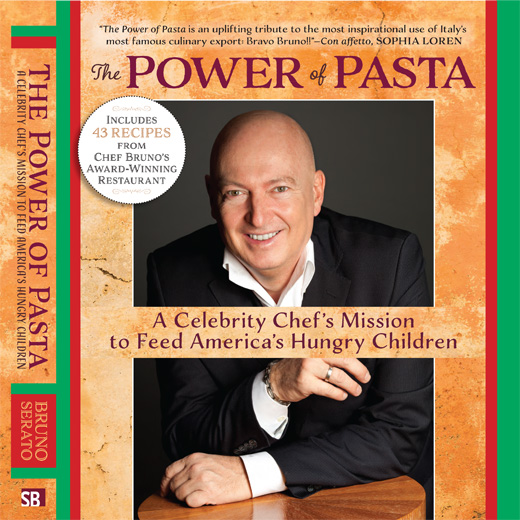 The latest biography to hit bookstands reads like a Horatio Alger story with an Italian twist. Like a fusilli pasta, this tale of chef/restaurateur/humanitarian has more twists and turns as we follow Sir Bruno Serato’s tale of growing up poor in rural Italy, arriving in America as a young man with just $200 in his pocket and through hard work, determination and a little luck, achieving the American dream.

Published by Select Books and available at Barnes & Noble and Amazon.com, “The Power of Pasta” ($28.95) recounts how Serato, who arrived in the U.S. not speaking a word of English, parlayed his small savings into realizing his dream of operating his own fine dining restaurant frequented by celebrities, U.S. Presidents and royalty. But what really put Serato on the map was creating a movement that started with feeding hungry children right here in the U.S. and later expanding that mission

to include finding permanent homes for “motel families” (so named because they live in cheap, crime-ridden rooms) and helping at-risk youth escape gang life by introducing them to careers in the hospitality field.

Readers follow along as he builds his Italian steakhouse into a celebrity watering hole then, in 2005, his real-life mission begins after he and his mother learn that in the backyard of the great wealth of Orange County, Calif, children are going to bed hungry each night. We follow along as he generously commits to preparing pasta for them each evening and watching that need expand exponentially. The numbers grew from150 that first night to currently serving more than 3,500 hungry mouths with more than 1.5 million fed so far.

Even when faced with devastating hardships like the Great Recession of 2008 and a fire that decimated his beloved Anaheim White House restaurant in 2017, Serato never gave up. It’s his fighting spirit and dedication to children in need that have earned him countless tributes including CNN’s Top 10 Hero Award, Humanitarian Award by U.S. Congress, a personal blessing from St. Francis and being knighted by the Italian government.

Another highlight of the book is the revelation of up-to-now closely held secret recipes of many of the dishes that earned the Anaheim White House attention from such notable media as the New York Times, CBS Evening News and NBC Nightly News. The detailed recipes for several of the small plates, entrees and desserts that have earned his restaurant critical acclaim are accompanied by stunning color photos that guide Caterina’s Club, Serato’s nonprofit that he named after his beloved mother.