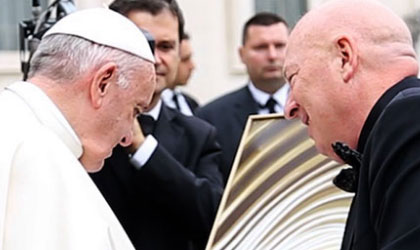 Joining the ranks of 7 U.S. Presidents, Supreme Court Justice Sandra Day O’Connor, Jacqueline Kennedy Onassis, Coretta Scott King, Muhammad Ali and Rosa Parks, to name just a few, Sir Bruno Serato will be inducted into the Ellis Island Honors Society and receive a medal of honor at a ceremony in the historic Great Hall at Ellis Island in NYC on Saturday, May 12. More than 300 service members participate in an opening ceremony that includes a joint-service color guard representing all five branches of the military.

The Ellis Island Medals of Honor are presented annually to a select group of individuals whose accomplishments in their field and inspired service to our nation are cause for celebration. The Medal has been officially recognized by both Houses of Congress as one of our nation’s most prestigious awards and is annually memorialized in the Congressional Record.

“The Ellis Island Medals of Honor embody the spirit of America in their salute to tolerance, brotherhood, diversity and patriotism, said Ellis Island Honors Society Chairman Nasser Kazeminy. “Our honorees may be native-born or naturalized, but most importantly, they are individuals who have made it their mission to share their wealth of knowledge, indomitable courage, boundless compassion, unique talents and selfless generosity with those less fortunate.”

Serato arrived in the U.S. from his native Italy speaking no English with only $200 in his pocket. Through hard work and determination, he worked his way up from busboy to owner of the critically acclaimed Anaheim White House restaurant, whose patrons include U.S. Presidents, sports stars and celebrities.

But it’s his work with children that has earned him an international reputation. In 2005, he launched the nonprofit, Caterina’s Club, which today feeds nearly 4,000 hungry children daily. In addition, his organization helps “motel families” into permanent housing and its Hospitality Program diverts high school students from gangs and other bad influences by teaching them about the food, hospitality and service industries.

For his humanitarian work, Serato has earned international publicity including profiles in People Magazine, “CBS Evening News,” “NBC Nightly News,” CNN and newspapers and magazines the world over. Among his many honors is being named a CNN Hero, being knighted by the Italian government, receiving a papal blessing from Pope Francis and earning a humanitarian award on the steps of the U.S. Capitol.