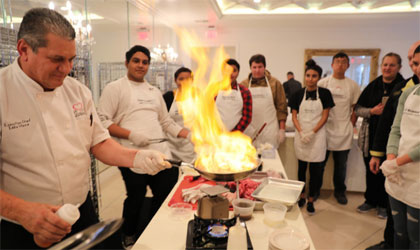 The office of the Chancellery of the House of Savoy has announced that they will induct Huntington Beach resident Sir Bruno Serato into the Order of Merit in recognition of his years long global mission of stamping out hunger for underprivileged children. The series of traditional events will be held in Rome, Italy in late September.

The House of Savoy is a royal family that was established in 1003 in a small alpine region located between Italy and France.

The honor being bestowed upon Serato is tantamount to a Knightship, a form of recognition Serato has already received from the Italian Republic. The ceremony will take place at the Vatican Church of Saint Giovanni in Laterano, Italy.

“I’m delighted to receive this tremendous honor from the House of Savoy,” said Serato, who said that the three-day series of events include an induction at the Royal Palace during which he will be fitted with a customary robe offered only to knights of distinction. “Many Italians still respect and acknowledge the many customs and traditions that hearken back to the 11th century.”

Immediately after the induction, Serato will launch the Italian language version of “The Power of Pasta” in Verona then set upon an extensive book tour of Italy. Among his stops will be as celebrity honoree at pasta manufacturer Barilla’s headquarters on World Pasta Day.

For his humanitarian work, Serato has earned international publicity including profiles in People Magazine, “CBS Evening News” and newspapers and magazines the world over. Among his many honors is being named a CNN Hero, being knighted by the Italian government, receiving a papal blessing from Pope Francis, getting a humanitarian award on the steps of the U.S. Capitol, being honored by the Good News Foundation and receiving numerous proclamations, Man of the Year awards and other forms of recognition — all of which he accepts to generate public awareness of the needs of our most vulnerable population — our children. For more information, visit www.caterinasclub.org.