Sir Bruno Serato arrived in the U.S. from his native Italy speaking no English with only $200 in his pocket. Through hard work and determination, he worked his way up from busboy to owner of the critically acclaimed Anaheim White House restaurant, whose patrons include U.S. Presidents, sports stars and celebrities. But it’s his work with children that has earned him an international reputation. Serato launched the nonprofit in 2005 after he and his mother, Caterina, visited a local Boys and Girls Club. There, they saw a 7-year-old boy eating a bag of potato chips and when she learned that the snack was all he had for dinner, she instructed her son to head back to the restaurant and feed the children pasta. What started with 1 meal has turned into now feeding some 5,000 children daily, more than 3M million meals have been served, and the need keeps growing. Caterina’s Club is currently serving 90 sites in 30 cities.

He has extended his mission by moving “motel families” into permanent housing. While many of the families are working and able to pay the monthly rent for their own apartments, they cannot afford the first, last and security deposit required at the onset. He has already helped over 220 families escape motel living by finding them apartments of their own and their lives have improved considerably.

His newest endeavor is working with the Anaheim Union High School District to establish the Hospitality Program, which seeks to divert high school students from gangs and other bad influences by teaching them about the food, hospitality and service industries. The students receive hands-on experience and even paid internships in these areas so that they can explore careers in the field following graduation. Over 250 students have participated in Chef Bruno’s Hospitality Academy.

For his humanitarian work, Serato has earned local, national, and international publicity including profiles in People Magazine, CBS, NBC, CNN,  AF Press, Asia, Japan, Taiwan, Hong Kong, Ecuador, Colombia, Brazil, Mexico, France, Italy, Germany, Spain, Switzerland, and for the first time ever all over the Middle East, as well as newspapers and magazines all over the world. Among his many honors: CNN Hero, knighted by the Italian government, knighted by the Royal House of Savoy, Ellis Island Medal of Honor recipient, papal blessing from Pope Francis, humanitarian award on the steps of the U.S. Capitol, Anaheim Key to the City, and has received hundreds of proclamations and awards all over the world. Press and speeches have been done in all of Europe, South America, and Dubai — all of which he conducts to generate public awareness of the needs of our most vulnerable population – our children. 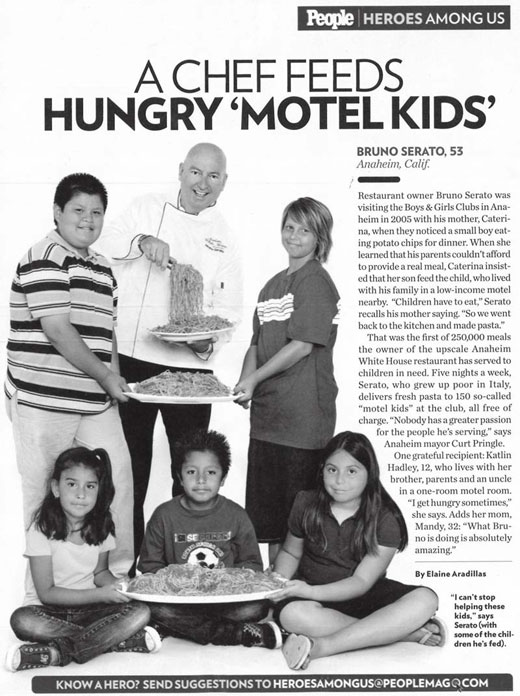